Essay #5 Inspiration Along The Way 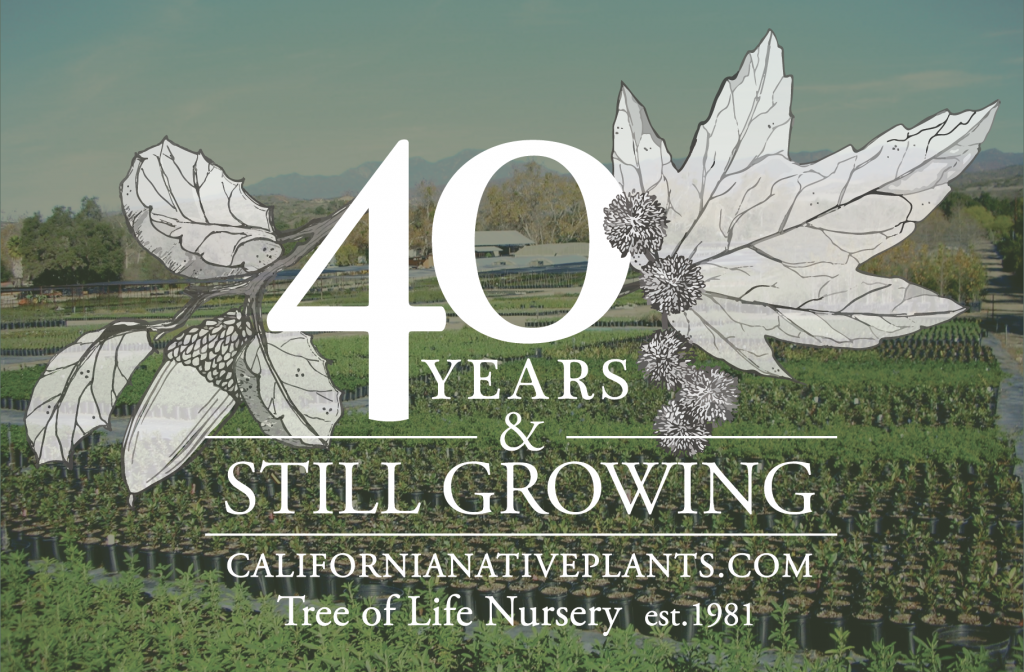 The story of Tree of Life Nursery is really a story of people and passion. And plants. California native plants and the land we occupy for growing, plus our team of friends and colleagues, including our loyal customers. 2021 marks the official 40-year anniversary of the partnership between the owners Jeff Bohn and Mike Evans. Mike founded the original company under the name Tree of Life Nursery and Landscape in 1977. Through a mutual friend and native plant expert, Mr. Art Tyree, (who learned from Mr. Theodore Payne himself) Jeff and Mike met in 1979 and discovered they had a lot in common; beach culture, surfing, the outdoor life, functional landscapes, sustainable gardens, landscape design, nursery experience, and a love for California native plants. Their story of building a nursery, a business, and a lifestyle will be told in a series of monthly essays to be published through 2021.

There are places I remember
All my life though some have changed
Some forever, not for better
Some have gone and some remain

INSPIRATION ALONG THE WAY

Tree of Life. Many people say they get inspired by just coming to the nursery and we are pleased, because the land, setting, big trees, birds, people, buildings, even Dakota the nursery dog really make this a special place. Honestly, we are inspired here every day.

For that matter, other places matter too. California – all of it, is an amazing place and we take inspiration from our individual sojourns into natural areas, stories and memories of camps, trails and outings, continually sharing these experiences here at work to stay inspired. The inspiration for our built environment comes from the cultural and natural histories of California. Our garden designs are inspired by nature.

But people are our real source of lasting inspiration. Looking back, I know I could fill the entire page with names of people, “some are dead and some are living,” who have provided us inspiration as we have plodded our way through the last 40 years. But the list would be long, and inadvertently some names would be left out, so I won’t chance it. But I will confidently talk about one individual who in our early years, put wind in our sails and served as an incredible example of a gentleman, plantsman, horticulturist and native plant expert.

John Dourley was the Director of Horticulture at Rancho Santa Ana Botanic Garden when we met him. His birthplace, Scotland, his horticultural training formal and precise, his curiosity admirable, his knowledge and experience incomparable, and his overall demeanor kind, accepting, patient, and humble. He took us in like adopted sons ready to learn the way he learned, as apprentices at the foot of a master.

John Dourley was born in 1922. After volunteering in the British Army, Royal Artillery from 1939-1945, stationed in Gibraltar during WWII, he took formal horticultural training at the Royal Botanic Garden (RBG) in Edinborough, Scotland, where he went on to work. He and his wife, with a three-month-old son immigrated to America in 1952 where John held a position for three years as head gardener at the Holmes Estate in Old Westbury, New York. They later spent a year in Ohio with John working at a small estate called the Dewey Gardens and Greenhouses.

In 1956, John became the Superintendent at the Morris Arboretum of the University of Pennsylvania. He and Kathleen would go on to have six children during his vibrant career.  He authored several papers on medicinal plants and gardens while at the Morris.

In 1967, John moved his family to Claremont, California where he became the Superintendent of the Rancho Santa Ana Botanic Garden. Mr. Percy Everett, who had been hired by the founder, Mrs. Susan Bixby Bryant, was readying for retirement. John’s family was excited at the prospect of this postcard land where winter citrus adorned orchard trees at the foot of snow capped mountains. A couple years after John’s passing, Mrs. Kathleen Dourley, told me that when he came out for the interview, he called home and described the scene at his hotel, the sun shining bright and people playing in the pool. She said their kids (and she) were crying out, “Take the job, take the job!” Kathleen had been shoveling snow that morning. John took the job.

With almost no prior knowledge of Californian or Mediterranean plants, he was a quick study working a few months alongside Percy Everett. He applied sound principles, and became the recognized expert, making new contributions at Rancho and getting involved in southern California’s horticultural community.

Jeff and I met John in 1981 or so. His stories and memories about the Scotland and New England gardens fascinated us long into the hours after dark on days we would go to RSA to obtain cuttings. He would guide Jeff and me to stands of species and cultivar natives and allow us to take an appropriate number of cuttings. He was generous, and a firm believer that one important role of the botanic garden was to supply propagation material to nurserymen, with the idea they could grow them out and eventually establish their own mother plants. This was key to Tree of Life having starter plants for propagation, even to this day.

On those days we would go for cuttings, and as the garden would be closing, we would stop in to say thanks. Then the story telling would begin. And questions. And answers. And new stories. John the storyteller.  One of my favorites was how a group of gardeners at the Morris were keen on plant I.D. and in came a fellow one afternoon with a dormant twig from some random tree… that no one could identify. A dormant twig. So they wanted to see the whole plant and solve the mystery. They got in a car and drove two or three Pennsylvania counties away, found the tree, speculated on its name, and arrived home after midnight! Talk about passion for plants! Some nights Jeff and I arrived home sometime between dinner and midnight as well. I’ll always remember stopping at the first phone booth to call home and tell our wives we were OK. After a few trips, we simply told them beforehand we were going to Rancho, and not to expect us until after ten.

John Dourley would always take time to teach, and he was continually learning as well… a true example of a real gardener. He trained the entire RSA gardening staff in the ways of traditional horticulture, and with his lovely Scottish brogue and amiable disposition, was well liked by everyone. And we were inspired. The Maintenance Superintendent, Guy Steenhuiven, (a good friend to both John and to this day, Kathleen) recently told me that at first some of the gardeners would ask him to “translate” John’s instructions when they were spoken too fast in his delightful “Scottish.”

Our visits became as much social and educational as well as specifically intended to obtain cuttings. We became the only grower of a very fine RSA patented hybrid, Mahonia ‘Golden Abundance’, and we dutifully paid the royalties for every plant sold. We were allowed cuttings of the best of the best and John was always pointing out new plants we should try. John and I were involved on committees with local water districts to make public conferences and gardens promoting water conservation in the landscape. Claremont, a tree city, consulted him regarding all their trees, native or otherwise. He assisted the Claremont colleges with their horticultural questions. Our friendship grew, our contact became more frequent, he with family and friends visiting Tree of Life now and then.

In 1981 John co-authored a book with Lee Lenz entitled “California Native Trees and Shrubs.” Though out of print, it should be on the shelf of every serious California gardener, as the information is never out of date.

Shortly after his early retirement in 1987 (caused by an awkward top-down personnel change the ever-polite Mr. Dourley decided not to dwell on) the Curator of the Living Collection, Mr. Walter Wizura, offered us cuttings from two different manzanita hybrids that John and he had been eyeing for ten years. Both were spontaneous hybrids which had sprouted and grown in the RSA cultivar garden. On trials, we found one to be superior in every way, in fact to be perhaps the best midsize mounding spreader we had ever seen. RSA gave it to TOLN to introduce so it was ours to name.

For us it was a great privilege to recognize the man who had not been properly honored at his departure as Director of Horticulture, and while the plant did originate at RSA, it was introduced by TOLN in 1990. We called it Arctostaphylos ‘John Dourley’.  Among all the plants TOLN has introduced over the years, this is the one we are most proud of. The plant has been in production for 30 years and is recognized in the trade as one of the sturdiest and most beautiful manzanita cultivars. It is now propagated and sold in nurseries far and wide. John was flattered, and since he knew it really was a good plant, did not seem to mind the attention.

John passed away in October 2015, survived by his wife, plus five of their six children and their families. I have been blessed to keep in touch with Kathleen who moved from Claremont to Pomona. She helped immensely with many details for this essay. A few years ago she gave me books from John’s library, (after the immediate family chose their items) and I feel incredibly honored to have, for example, one from 1923 by Willis Linn Jepson entitled Trees of California. On the frontispiece, signed by their own hand are the names Percy Everett, John Dourley, Mike Evans. John still lives large in the heart of Tree of Life Nursery.

Inspiration. We all need it every day. Where do we find it? Can we inspire others? At TOLN we find it in people, places and plants. We exist so people get the inspiration and plants they need to build inspiring gardens.

Over the last 40 years we have found inspiration in many places, “some are gone and some remain”, but mostly in people, including a handful of horticultural heroes. But the one who stands out as having taught and inspired us the most was John Dourley. And we hope to pass it on, inspiration that is, because that’s what it’s all about. John must have had a mentor in his early years at the Royal Botanic Garden, and he followed up by inspiring us. Perhaps someday, we here at TOLN will get our turn to inspire the next person lucky enough to spend their whole life working with plants. Then they can pass it on to the next one.